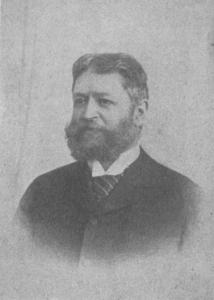 Lőwy Hevesi Lajos, or Ludwig Hevesi (December 20, 1843, Heves, Hungary – February 17, 1910, Vienna) was a Hungarian journalist and writer. He studied medicine and classical philology in Budapest and Vienna, but soon turned to writing, and as of 1865 he was an active journalist and author. In 1866, he became engaged as a contributor to the "Pester Lloyd", and later to the "Breslauer Zeitung", for which publications he wrote humorous feuilletons. In 1875, Hevesi settled in Vienna and became the associate editor for the art department of the Wiener Fremden-Blatt. He also wrote dramatic criticisms on the performances in the Hofburgtheater. During 1871-74 he edited "Kleine Leute", a journal for the young. The first 7 volumes of the journal originated exclusively from his pen. In conjunction with a few friends he founded the Hungarian humor publication "Borsszem Jankó", which soon became a popular journal.
Read more or edit on Wikipedia