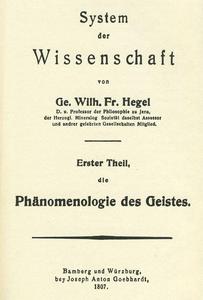 The Phenomenology of Spirit

The Phenomenology of Spirit (German: Phänomenologie des Geistes) (1807) is Georg Wilhelm Friedrich Hegel's most widely discussed philosophical work; its German title can be translated as either The Phenomenology of Spirit or The Phenomenology of Mind. Hegel described the work as an "exposition of the coming to be of knowledge". This is explicated through a necessary self-origination and dissolution of "the various shapes of spirit as stations on the way through which spirit becomes pure knowledge".The book marked a significant development in German idealism after Immanuel Kant. Focusing on topics in metaphysics, epistemology, physics, ethics, history, religion, perception, consciousness, and political philosophy, it is where Hegel develops his concepts of dialectic (including the master–slave dialectic), absolute idealism, ethical life, and Aufhebung. It had a profound effect in Western philosophy, and "has been praised and blamed for the development of existentialism, communism, fascism, death of God theology, and historicist nihilism".
Read more or edit on Wikipedia