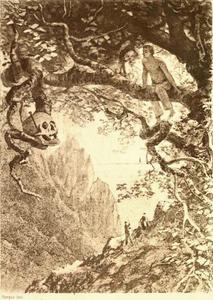 "The Gold-Bug" is a short story by Edgar Allan Poe published in 1843. The plot follows William Legrand, who was bitten by a gold-colored bug. His servant Jupiter fears that Legrand is going insane and goes to Legrand's friend, an unnamed narrator, who agrees to visit his old friend. Legrand pulls the other two into an adventure after deciphering a secret message that will lead to a buried treasure. The story, set on Sullivan's Island, South Carolina, is often compared with Poe's "tales of ratiocination" as an early form of detective fiction. Poe became aware of the public's interest in secret writing in 1840 and asked readers to challenge his skills as a code-breaker. He took advantage of the popularity of cryptography as he was writing "The Gold-Bug", and the success of the story centers on one such cryptogram. Modern critics have judged the characterization of Legrand's servant Jupiter as racist, especially because of his comical dialect speech. Poe submitted "The Gold-Bug" as an entry to a writing contest sponsored by the Philadelphia Dollar Newspaper. His story won the grand prize and was published in three installments, beginning in June 1843. The prize also included $100, probably the largest single sum that Poe received for any of his works. "The Gold-Bug" was an instant success and was the most popular and most widely read of Poe's works during his lifetime. It also helped popularize cryptograms and secret writing.
Read more or edit on Wikipedia