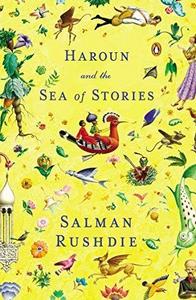 Haroun and the Sea of Stories

Haroun and the Sea of Stories is a 1990 children's book by Salman Rushdie. It was Rushdie's fifth novel, following The Satanic Verses. It is a phantasmagorical story that begins in a city so old and ruinous that it has forgotten its name.Haroun and the Sea of Stories is an allegory for several problems existing in society today, especially in the Indian subcontinent. It looks at these problems from the viewpoint of the young protagonist Haroun. Rushdie dedicated this book to his son, from whom he was separated for some time. Many elements of the story deal with the problems of censorship: an issue particularly pertinent to Rushdie because of the fatwa against him backed by Ayatollah Khomeini. The book is highly allusive and puns in multiple languages. Many of the major characters' names allude to some aspect of speech or silence. It was made into an audiobook read by Rushdie himself.
Read more or edit on Wikipedia

original title: Haroun and the Sea of Stories
language: English
date of publication: 1990
genre: magic realism, novel
follows: The Satanic Verses
followed by: Luka and the Fire of Life