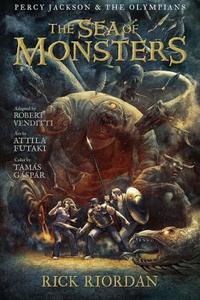 The Sea of Monsters

The Sea of Monsters is an American fantasy-adventure novel based on Greek mythology written by Rick Riordan and published in 2006. It is the second novel in the Percy Jackson & the Olympians series and the sequel to The Lightning Thief. This book chronicles the adventures of thirteen-year-old demigod Percy Jackson as he and his friends rescue his satyr friend Grover from the Cyclops Polyphemus and save Camp Half-Blood from a Titan's attack by bringing the Golden Fleece to cure Thalia's poisoned pine tree. The Sea of Monsters was released on April 1, 2006, by Miramax Books, an imprint of Hyperion Books for Children and thus Disney Publishing (succeeded by the Disney Hyperion imprint). It was generally well–received and was nominated for numerous awards, including the 2006 Book Sense Top Ten Summer Pick and the 2009 Mark Twain Award. It sold over 100,000 copies in paperback with over one million copies total and was released in audiobook format on September 6, 2006. The Sea of Monsters is followed by The Titan's Curse, the third book of the five books in the series. A film adaptation of the book, Percy Jackson: Sea of Monsters, was released on August 7, 2013.
Read more or edit on Wikipedia