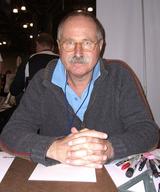 Brian Bolland (; born 26 March 1951) is a British comics artist. Best known in the United Kingdom as one of the definitive Judge Dredd artists for British comics anthology 2000 AD, he spearheaded the 'British Invasion' of the American comics industry, and in 1982 produced the artwork on Camelot 3000 (with author Mike W. Barr), which was DC Comics' first 12-issue comicbook maxiseries created for the direct market.Bolland illustrated the critically acclaimed graphic novel Batman: The Killing Joke, with writer Alan Moore, and a self-penned Batman: Black and White story. He subsequently concentrated on working as a cover artist, producing the vast majority of his work for DC Comics. Bolland created cover artwork for the Animal Man, Wonder Woman, and Batman: Gotham Knights superhero comic book series. In DC's Vertigo imprint, Bolland has done covers for The Invisibles, Jack of Fables, and a number of one-shots and miniseries. In addition to interior and cover art, Bolland has also produced several comic strips and pin-ups as both writer and artist. His most notable are the semi-autobiographical humour strip Mr. Mamoulian and the whimsical rhyming strip The Actress and the Bishop. In 2006, he published The Art of Brian Bolland, showcasing all of Bolland's work to date and also his work as a photographer. Source: Wikipedia (en)