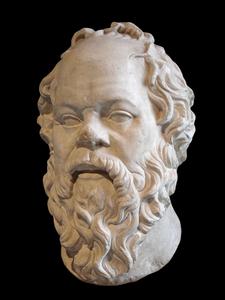 Socrates (; Greek: Σωκράτης, translit. Sōkrátēs [sɔːkrátɛːs]; c. 470–399 BC) was a Greek philosopher from Athens who is credited as a founder of Western philosophy and the first moral philosopher of the ethical tradition of thought. An enigmatic figure, Socrates authored no texts and is known mainly through the posthumous accounts of classical writers, particularly his students Plato and Xenophon. These accounts are written as dialogues, in which Socrates and his interlocutors examine a subject in the style of question and answer; they gave rise to the Socratic dialogue literary genre. Contradictory accounts of Socrates make a reconstruction of the history of his life nearly impossible, a situation known as the Socratic problem. Socrates was a polarizing figure in Athenian society. In 399 BC, he was accused of corrupting the youth and failing to acknowledge the city's official gods. After a trial that lasted a day, he was sentenced to death. He spent his last day in prison, refusing to escape. Plato's dialogues are among the most comprehensive accounts of Socrates to survive from antiquity, from which Socrates has become renowned for his contributions to the fields of rationalism and ethics. This Platonic Socrates lends his name to the concept of the Socratic method, and also to Socratic irony. The Socratic method of questioning, or elenchus, takes shape in dialogue using short questions and answers, epitomized by those Platonic texts in which Socrates and his interlocutors examine various aspects of an issue or an abstract meaning, usually relating to one of the virtues, and find themselves completely unable to define what they thought they understood. Socrates is known for proclaiming his total ignorance; he used to say that the only thing he was aware of was his ignorance, seeking to imply that the realization of our ignorance is the first step in philosophizing. Socrates exerted a strong influence on philosophers in later antiquity and has continued to do so in the modern era. Almost all major philosophical currents in the classical era saw themselves as continuing the work of Socrates. Socrates was studied by medieval and Islamic scholars and played an important role in the thought of the Italian Renaissance, particularly within the humanist movement. Interest in Socrates continued unabated, as reflected in the works of Søren Kierkegaard and Friedrich Nietzsche. Depictions of Socrates in art, literature and popular culture have made him a widely known figure in the Western philosophical tradition.
Read more or edit on Wikipedia