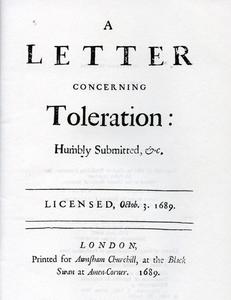 A Letter Concerning Toleration by John Locke was originally published in 1689. Its initial publication was in Latin, and it was immediately translated into other languages. Locke's work appeared amidst a fear that Catholicism might be taking over England, and responds to the problem of religion and government by proposing religious toleration as the answer. This "letter" is addressed to an anonymous "Honored Sir": this was actually Locke's close friend Philipp van Limborch, who published it without Locke's knowledge.
Read more or edit on Wikipedia