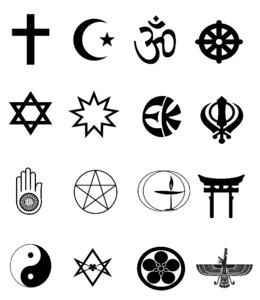 Religion is usually defined as a social-cultural system of designated behaviors and practices, morals, beliefs, worldviews, texts, sanctified places, prophecies, ethics, or organizations, that generally relates humanity to supernatural, transcendental, and spiritual elements; however, there is no scholarly consensus over what precisely constitutes a religion. Different religions may or may not contain various elements ranging from the divine, sacred things, faith, a supernatural being or supernatural beings or "some sort of ultimacy and transcendence that will provide norms and power for the rest of life".Religious practices may include rituals, sermons, commemoration or veneration (of deities or saints), sacrifices, festivals, feasts, trances, initiations, funerary services, matrimonial services, meditation, prayer, music, art, dance, public service, or other aspects of human culture. Religions have sacred histories and narratives, which may be preserved in sacred scriptures, and symbols and holy places, that aim mostly to give a meaning to life. Religions may contain symbolic stories, which are sometimes said by followers to be true, that may also attempt to explain the origin of life, the universe, and other phenomena. Traditionally, faith, in addition to reason, has been considered a source of religious beliefs.There are an estimated 10,000 distinct religions worldwide, though nearly all of them have regionally based, relatively small followings. Four religions--Christianity, Islam, Hinduism, and Buddhism--account for over 77% of the world's population, and 92% of the world either follows one of those four religions or identifies as non-religious, meaning that the remaining 9000+ faiths account for only 8% of the population combined. The religiously unaffiliated demographic includes those who do not identify with any particular religion, atheists, and agnostics. But many of the religiously unaffiliated still have various religious beliefs. A portion of the population mostly located in Africa and Asia are members of new religious movements. Scholars have indicated that global religiosity may be increasing due to religious countries having higher birth rates in general.The study of religion comprises a wide variety of academic disciplines, including theology, philosophy of religion, comparative religion, and social scientific studies. Theories of religion offer various explanations for the origins and workings of religion, including the ontological foundations of religious being and belief.
Read more or edit on Wikipedia