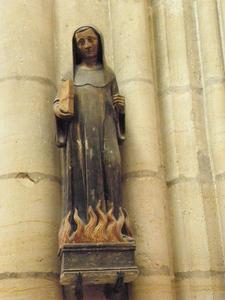 Saint Odilo of Cluny (c. 962 – 1 January 1049) was the fifth Benedictine Abbot of Cluny, holding the post for around 54 years. During his tenure Cluny became the most important monastery in western Europe. Odilo actively worked to reform the monastic practices not only at Cluny, but at other Benedictine houses. He also promoted the Truce of God whereby military hostilities were temporarily suspended at certain times for ostensibly religious reasons. Odilo encouraged the formal practice of personal consecration to Mary. He established All Souls' Day (on 2 November) in Cluny and its monasteries as the annual commemoration to pray for all the faithful departed. The practice was soon adopted throughout the whole Western church.
Read more or edit on Wikipedia