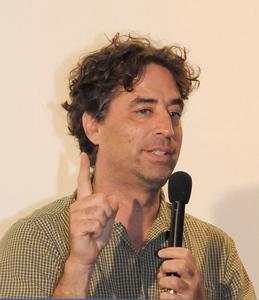 Michael Hardt (born 1960) is an American political philosopher and literary theorist. Hardt is best known for his book Empire, which was co-written with Antonio Negri. It has been praised by Slavoj Žižek as the "Communist Manifesto of the 21st Century".Hardt and Negri suggest that several forces which they see as dominating contemporary life, such as class oppression, globalization and the commodification of services (or production of affects), have the potential to spark social change of unprecedented dimensions. A sequel, Multitude: War and Democracy in the Age of Empire was published in August 2004. It outlines an idea first propounded in Empire, which is that of the multitude as possible locus of a democratic movement of global proportions. The third and final part of the trilogy, Commonwealth, was published in 2009.
Read more or edit on Wikipedia