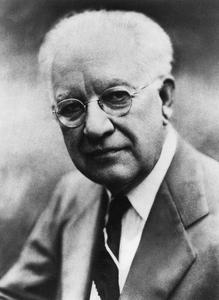 Robert Ezra Park (February 14, 1864 – February 7, 1944) was an American urban sociologist who is considered to be one of the most influential figures in early U.S. sociology. Park was a pioneer in the field of sociology, changing it from a passive philosophical discipline to an active discipline rooted in the study of human behavior. He made significant contributions to the study of urban communities, race relations and the development of empirically grounded research methods, most notably participant observation. From 1905 to 1914, Park worked with Booker T. Washington at the Tuskegee Institute. After Tuskegee, he taught at the University of Chicago from 1914 to 1933, where he played a leading role in the development of the Chicago School of sociology. Park is noted for his work in human ecology, race relations, human migration, cultural assimilation, social movements, and social disorganization.
Read more or edit on Wikipedia