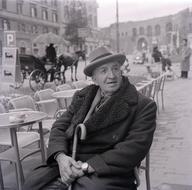 Vincenzo Cardarelli, pseudonym of Nazareno Caldarelli (1 May 1887 – 18 June 1959) was an Italian poet and journalist. Cardarelli was born in Corneto, Lazio, in a family of Marche origin. His father was Antonio Romagnoli. His studies were irregular and he applied to different jobs. In 1906, when he had moved to Rome, he began his career as a journalist. He created, in 1919 with Riccardo Bacchelli and Emilio Cecchi, the prestigious review La Ronda (1919-1922). He was one of the contributors of the Fascist daily Il Tevere.He won two literary awards, including the 1929 Premio Bagutta for Il Sole a picco and the 1948 Premio Strega for Villa Tarantola. Source: Wikipedia (en)