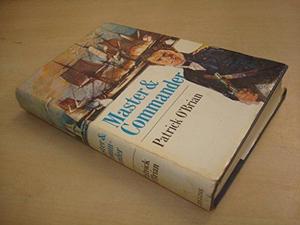 Master and Commander is a nautical historical novel by the English author Patrick O'Brian, first published in 1969 in the US and 1970 in UK. The book proved to be the start of the 20-novel Aubrey–Maturin series, set largely in the era of the Napoleonic Wars, that O'Brian continued working on up until his death in 2000. The novel is set at the turn of the 19th century. It follows the young Jack Aubrey who has just been promoted to the rank of Master and Commander, and Stephen Maturin, a destitute physician and naturalist whom Aubrey appoints as his naval surgeon. They sail in HM Sloop of War Sophie with first lieutenant James Dillon, a wealthy and aristocratic Irishman. The naval action in the Mediterranean is closely based on the real-life exploits of Lord Cochrane, including a battle modelled after Cochrane's spectacular victory in the brig HMS Speedy over the vastly superior Spanish frigate El Gamo. The novel puts the reader into the times in every aspect, from the ways of the Royal Navy on sailing ships to the state of science and medicine and social status. Master and Commander met with mixed early reviews on its first publication. Although UK sales were respectable enough for O'Brian to continue with his series, it was not initially a success in the US. In Britain and Ireland, however, voices of praise gradually became dominant. In 1990, the US publisher W W Norton re-issued the book and its sequels; this was an almost immediate success and drew O'Brian a new, large readership. O'Brian's biographer has placed the novel at the start of what he called the author's magnum opus, a series that has become perhaps the best-loved roman fleuve of the twentieth century.
Read more or edit on Wikipedia