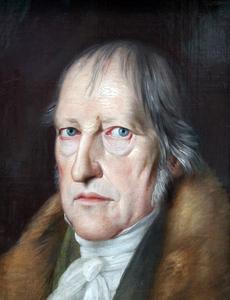 Georg Wilhelm Friedrich Hegel (; German: [ˈɡeːɔʁk ˈvɪlhɛlm ˈfʁiːdʁɪç ˈheːɡl̩]; 27 August 1770 – 14 November 1831) was a German philosopher considered one of the most important figures in German idealism. He is one of the fundamental figures of Western philosophy, with his influence extending to the entire range of contemporary philosophical issues, from aesthetics to ontology to politics, both in the analytic and continental tradition.Hegel's principal achievement was his development of a distinctive articulation of idealism, sometimes termed absolute idealism, in which the dualisms of, for instance, mind and nature and subject and object are overcome. In contrast to Immanuel Kant, who believes that the subject imposes rational a priori concepts of understanding upon sense-data, Hegel believes that reason is immanent within being, or existence, itself. Rational being is called the idea. For Hegel, the rational alone is real and reason itself is dynamic, active, self-determining, and purposive. Reason, or the idea, exists in nature and Geist, or Spirit. Reason’s self determining activity in nature culminates in the development of Spirit out of and from nature. Spirit is self-conscious reason knowing itself as reason. Reason can only realize this through human consciousness, and Spirit can only emerge and exist in human life. His philosophy of spirit conceptually integrates psychology, the state, history, art, religion and philosophy. His master–slave dialectic has been influential, especially in 20th-century France. Of special importance is his concept of spirit (Geist, sometimes also translated as "mind") as the historical manifestation of the logical concept – and the "sublation" (Aufhebung, integration without elimination or reduction) – of seemingly contradictory or opposing factors: examples include the apparent opposition between necessity and freedom and between immanence and transcendence. (Hegel has been seen in the twentieth century as the originator of the thesis, antithesis, synthesis triad, but as an explicit phrase it originated with Johann Gottlieb Fichte.)Hegel influenced a wide variety of thinkers and writers. For example, Paul Tillich wrote that the historical dialectical thought of Hegel "has influenced world history more profoundly than any other structural analysis." Karl Barth described Hegel as a "Protestant Aquinas" while Maurice Merleau-Ponty wrote that "all the great philosophical ideas of the past century—the philosophies of Marx and Nietzsche, phenomenology, German existentialism, and psychoanalysis—had their beginnings in Hegel." Michael Hardt has highlighted that the roots of post-structuralism and its unifying basis lies, in large part, in a general opposition not to the philosophical tradition tout court but specifically to the "Hegelian tradition" dominating philosophy in the twentieth century prior to post-structuralism.Hegel's work has been considered the "completion of philosophy" by multiple of the most influential thinkers in existentialism, post-structuralism, and twentieth-century theology. Derrida wrote of Hegel in his work Of Grammatology that "he undoubtedly summed up the entire philosophy of the logos. He determined ontology as absolute logic; he assembled all the delimitations of philosophy as presence," later remarking that Hegel is thus "the last philosopher of the book and the first philosopher of writing," indicating the relation of Hegel to post-structural thought by stating "if there were a definition of Différance, it would be precisely the limit, the interruption, the destruction of the Hegelian dialectical synthesis wherever it operates." In his work Systematic Theology, theologian Paul Tillich referred to Hegel's work as "perfect essentialism," later writing "essentialism was in Hegel's system fulfilled." Martin Heidegger observed in his 1969 work Identity and Difference and in his personal Black Notebooks that Hegel's system in an important respect "consummates western philosophy" by completing the idea of the logos, the self-grounding ground, in thinking through the identification of Being and beings, which is "the theme of logic", writing "[I]t is... incontestable that Hegel, faithful to tradition, sees the matter of thinking in beings as such and as a whole, in the movement of Being from its emptiness to its developed fullness." Heidegger in various places further stated Hegel's thinking to be "the most powerful thinking of modern times."
Read more or edit on Wikipedia