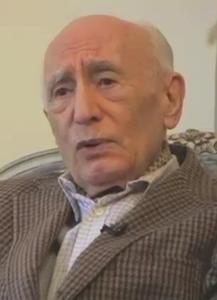 Ehsan Yarshater (Persian: احسان يارشاطر‎, April 3, 1920 – September 1, 2018) was an Iranian historian and linguist who specialized in Iranology. He was the founder and director of The Center for Iranian Studies, and Hagop Kevorkian Professor Emeritus of Iranian Studies at Columbia University. He was the first Persian full-time professor at a U.S. university since World War II.He was one of the 40 editors of the Encyclopædia Iranica, with articles by 300 authors from various academic institutions. He also edited the third volume of the Cambridge History of Iran, comprising the history of the Seleucid, the Parthians, and the Sassanians, and a volume entitled Persian Literature. He was also an editor of a sixteen-volume series named History of Persian Literature. He had won several International awards for scholarship, including a UNESCO award in 1959, and the Giorgio Levi Della Vida Medal for Achievement in Islamic Studies from UCLA in 1991. Lecture series in his name have been instituted at the University of London, and the University of California, Los Angeles, and at the Centre National de Recherche Scientifique in Paris.
Read more or edit on Wikipedia