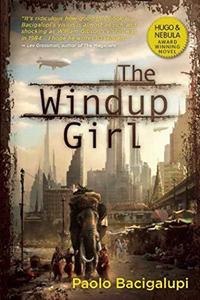 The Windup Girl is a biopunk science fiction novel by American writer Paolo Bacigalupi. It was his debut novel and was published by Night Shade Books on September 1, 2009. The novel is set in a future Thailand and covers a number of contemporary issues such as global warming and biotechnology. The Windup Girl was named as the ninth best fiction book of 2009 by TIME magazine. It won the 2010 Nebula Award and the 2010 Hugo Award (tied with The City & the City by China Miéville), both for best novel. The book also won the 2010 Campbell Memorial Award, the 2010 Compton Crook Award and the 2010 Locus Award for best first novel.
Read more or edit on Wikipedia