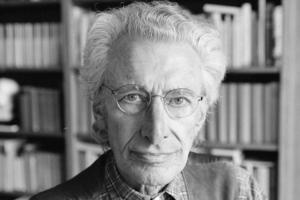 Harry Kurt Victor Mulisch (pronunciation [ˈɦɑriː ˈmʏlɪʃ]; 29 July 1927 – 30 October 2010) was a Dutch writer. He wrote more than 80 novels, plays, essays, poems, and philosophical reflections. Mulisch's works have been translated into over thirty languages.Along with Willem Frederik Hermans and Gerard Reve, Mulisch is considered one of the "Great Three" (De Grote Drie) of Dutch postwar literature. His novel The Assault (1982) was adapted into a film that won both a Golden Globe and an Academy Award. Mulisch's work is also popular among the country's public: a 2007 poll of NRC Handelsblad readers voted his novel The Discovery of Heaven (1992) the greatest Dutch book ever written. He was regularly mentioned as a possible future Nobel laureate. He won the 2007 International Nonino Prize in Italy.
Read more or edit on Wikipedia