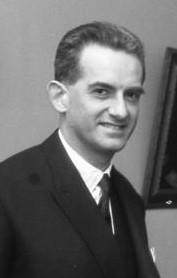 Alain Peyrefitte (French pronunciation: ​[alɛ̃ pɛʁfit]; 26 August 1925 – 27 November 1999) was a French scholar and politician. He was a confidant of Charles de Gaulle and had a long career in public service, serving as a diplomat in Germany and Poland. Peyrefitte is remembered for his support for partitioning Algeria amid the Algerian War.Peyrefitte served as Minister of Information from 1962 to 1966, establishing the rules of presidential debates between the two electoral rounds; and as Minister of Justice from 1977 to 1981, being involved in the affair surrounding the mysterious death of Robert Boulin in 1979. He became a member of the Académie française in 1977. On 15 December 1986, he survived an assassination attempt by members of Action Directe (AD) in front of his house. The driver of his car was killed in the bomb attack.Upon his death in 1999 he was honored by burial in Les Invalides which also houses the tomb of Napoleon and other revered national leaders.
Read more or edit on Wikipedia