Oren Patashnik (born 1954) is an American computer scientist. He is notable for co-creating BibTeX, and co-writing Concrete Mathematics: A Foundation for Computer Science. He is a researcher at the Center for Communications Research, La Jolla, and lives nearby in San Diego. Oren and his wife Amy have three children, Josh, Ariel, and Jeremy.
Read more or edit on Wikipedia 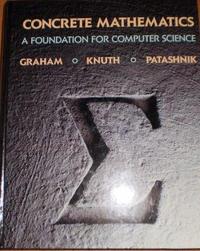