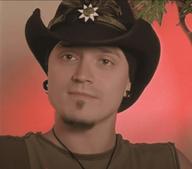 Erik von Markovik (born September 24, 1971), more popularly known by his stage name, Mystery, is a Canadian pickup artist and television personality. He is best known for his profiling in Neil Strauss'sThe Game and his appearances on the VH1 television show The Pickup Artist.He has been criticized for promoting unethical and manipulative behavior. Source: Wikipedia (en)