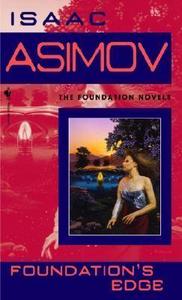 Foundation's Edge (1982) is a science fiction novel by American writer Isaac Asimov, the fourth book in the Foundation Series. It was written more than thirty years after the stories of the original Foundation trilogy, due to years of pressure by fans and editors on Asimov to write another, and, according to Asimov himself, the amount of the payment offered by the publisher. It was his first novel to ever land on The New York Times best-seller list, after 262 books and 44 years of writing. Foundation's Edge won both the Hugo Award for Best Novel in 1983 and the Locus Award for Best Science Fiction Novel in 1983, and was nominated for the Nebula Award for Best Novel in 1982.
Read more or edit on Wikipedia