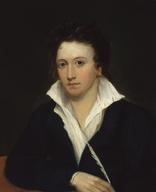 Percy Bysshe Shelley ( (listen) BISH; 4 August 1792 – 8 July 1822) was one of the major English Romantic poets. A radical in his poetry as well as in his political and social views, Shelley did not achieve fame during his lifetime, but recognition of his achievements in poetry grew steadily following his death and he became an important influence on subsequent generations of poets including Robert Browning, Algernon Charles Swinburne, Thomas Hardy, and W. B. Yeats. American literary critic Harold Bloom describes him as "a superb craftsman, a lyric poet without rival, and surely one of the most advanced sceptical intellects ever to write a poem." Shelly's reputation fluctuated during the 20th century, but in recent decades he has achieved increasing critical acclaim for the sweeping momentum of his poetic imagery, his mastery of genres and verse forms, and the complex interplay of sceptical, idealist, and materialist ideas in his work. Among his best-known works are "Ozymandias" (1818), "Ode to the West Wind" (1819), "To a Skylark" (1820), the philosophical essay "The Necessity of Atheism" written alongside his friend T. J. Hogg (1811), and the political ballad "The Mask of Anarchy" (1819). His other major works include the verse drama The Cenci (1819) and long poems such as Alastor, or The Spirit of Solitude (1815), Julian and Maddalo (1819), Adonais (1821), Prometheus Unbound (1820)—widely considered his masterpiece—Hellas (1822), and his final, unfinished work, The Triumph of Life (1822). Shelley also wrote prose fiction and a quantity of essays on political, social, and philosophical issues. Much of this poetry and prose was not published in his lifetime, or only published in expurgated form, due to the risk of prosecution for political and religious libel. From the 1820s, his poems and political and ethical writings became popular in Owenist, Chartist, and radical political circles, and later drew admirers as diverse as Karl Marx, Mahatma Gandhi, and George Bernard Shaw.Shelley's life was marked by family crises, ill health, and a backlash against his atheism, political views and defiance of social conventions. He went into permanent self-exile in Italy in 1818, and over the next four years produced what Leader and O'Neill call "some of the finest poetry of the Romantic period". His second wife, Mary Shelley, was the author of Frankenstein. He died in a boating accident in 1822 at the age of 29. Source: Wikipedia (en)