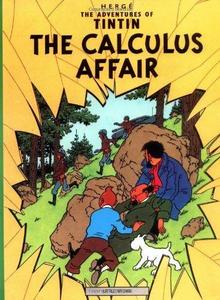 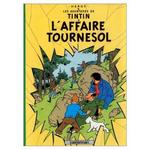 The Calculus Affair (French: L'Affaire Tournesol) is the eighteenth volume of The Adventures of Tintin, the comics series by the Belgian cartoonist Hergé. It was serialised weekly in Belgium's Tintin magazine from December 1954 to February 1956 before being published in a single volume by Casterman in 1956. The story follows the attempts of the young reporter Tintin, his dog Snowy, and his friend Captain Haddock to rescue their friend Professor Calculus, who has developed a machine capable of destroying objects with sound waves, from kidnapping attempts by the competing European countries of Borduria and Syldavia. Like the previous volume, Explorers on the Moon, The Calculus Affair was created with the aid of the Hergé's team of artists at Studios Hergé. The story reflected the Cold War tensions that Europe was experiencing during the 1950s, and introduced three recurring characters into the series: Jolyon Wagg, Cutts the Butcher, and Colonel Sponsz. Hergé continued The Adventures of Tintin with The Red Sea Sharks, and the series as a whole became a defining part of the Franco-Belgian comics tradition. The Calculus Affair was critically well-received, with various commentators having described it as one of the best Tintin adventures. The story was adapted for both the 1957 Belvision animated series Hergé's Adventures of Tintin, the 1991 Ellipse/Nelvana animated series The Adventures of Tintin, and the 1992-3 BBC Radio 5 dramatisation of the Adventures.
Read more or edit on Wikipedia