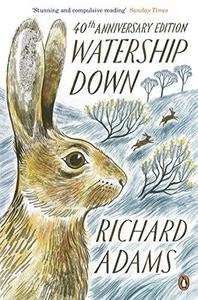 Watership Down is a survival and adventure novel by English author Richard Adams, published by Rex Collings Ltd of London in 1972. Set in southern England, around Hampshire, the story features a small group of rabbits. Although they live in their natural wild environment, with burrows, they are anthropomorphised, possessing their own culture, language, proverbs, poetry, and mythology. Evoking epic themes, the novel follows the rabbits as they escape the destruction of their warren and seek a place to establish a new home (the hill of Watership Down), encountering perils and temptations along the way. Watership Down was Richard Adams' debut novel. It was rejected by several publishers before Collings accepted the manuscript; the published book then won the annual Carnegie Medal (UK), annual Guardian Prize (UK), and other book awards. The novel was adapted into an animated feature film in 1978, and later, a television series, which ran from 1999 to 2001. Even later, a miniseries of the story was made, which aired in the UK in 2018, and was also put on Netflix at the same time. Adams completed a sequel almost 25 years later, in 1996, Tales from Watership Down, constructed as a collection of 19 short stories about El-ahrairah and the rabbits of the Watership Down warren.
Read more or edit on Wikipedia