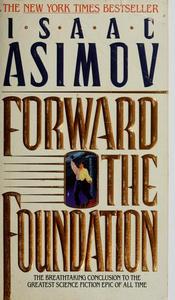 Forward the Foundation is a novel by American writer Isaac Asimov, published posthumously in 1993. It is the second of two prequels to the Foundation Series. It is written in much the same style as the original novel Foundation, a novel composed of chapters with long intervals in between. Both books were first published as independent short stories in science fiction magazines. The parallels between Hari Seldon and Isaac Asimov found in this book— the last one written by Asimov before his death— and the focus on Hari Seldon as he grows old and dies, strengthen the idea that Asimov considered Seldon his literary alter ego. Critics such as Josh Wimmer and Alasdair Wilkins have regarded many of the opinions and viewpoints expressed by Seldon in this book as autobiographical. Thus, a detailed reading of Forward the Foundation can shed light on Asimov's inner thoughts at the end of his life.Like other previous science fiction works by Asimov, the book was a commercial success, becoming a New York Times bestselling work.
Read more or edit on Wikipedia