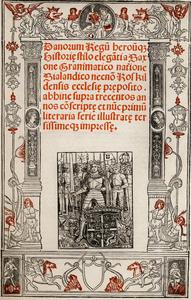 Gesta Danorum ("Deeds of the Danes") is a patriotic work of Danish history, by the 12th-century author Saxo Grammaticus ("Saxo the Literate", literally "the Grammarian"). It is the most ambitious literary undertaking of medieval Denmark and is an essential source for the nation's early history. It is also one of the oldest known written documents about the history of Estonia and Latvia. Consisting of sixteen books written in Latin on the invitation of Archbishop Absalon, Gesta Danorum describes Danish history and to some degree Scandinavian history in general, from prehistory to the late 12th century. In addition, Gesta Danorum offers singular reflections on European affairs in the High Middle Ages from a unique Scandinavian perspective, supplementing what has been handed down by historians from Western and Southern Europe.
Read more or edit on Wikipedia