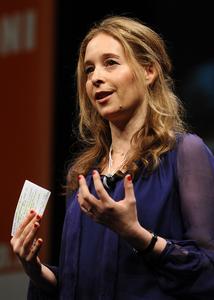 Noreena Hertz (born 24 September 1967) is an English academic, economist, author and has hosted her show, "MegaHertz: London Calling," on Sirius XM's Insight channel since 28 August 2017. She has been Honorary Professor at the Institute for Global Prosperity at University College London since 2014. She also acts as Sirius XM's chief Europe correspondent. In 2016 she joined ITV News as its Economics Editor.In 2001 The Guardian newspaper dubbed her "one of the world's leading young thinkers" In September 2013 Hertz was featured on the cover of Newsweek magazine. Fast Company magazine has named her "one of the most influential economists on the international stage" and observed: "For more than two decades [her] economic predictions have been accurate and ahead of the curve."She describes herself as "a campaigning academic", but according to the Evening Standard critics have called her "a do-gooder who moves like a grasshopper from one high-profile good cause to another." British media has nicknamed her the "Nigella Lawson of economics".
Read more or edit on Wikipedia