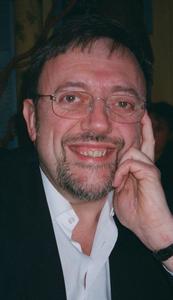 Brian David Sibley (born 14 July 1949) is an English writer. He is author of over 100 hours of radio drama and has written and presented hundreds of radio documentaries, features and weekly programmes. He is widely known as the author of many film "making of" books, including those for the Harry Potter series and The Lord of the Rings and The Hobbit trilogies.
Read more or edit on Wikipedia