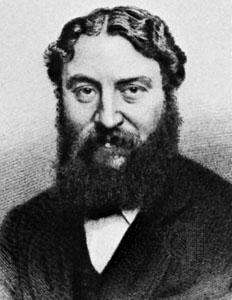 Thomas William Robertson (9 January 1829 – 3 February 1871) was an English dramatist and stage director. Born to a theatrical family, Robertson began as an actor, but he was not a success and gave up acting in his late 20s. After earning a modest living writing articles for the press, translating and adapting foreign plays and writing several of his own plays he achieved success in 1865 with his play Society, which the actor-manager Marie Wilton presented at a small London theatre, the Prince of Wales's. Over the next five years Robertson wrote five more plays for the Prince of Wales's. Their naturalistic style and treatment of contemporary social issues was in strong contrast to the melodramas and exaggerated theatricality to which the public had been accustomed, and Robertson's plays were box-office and critical successes. Robertson supervised their productions and was a pioneer of modern stage directing. Among later theatrical figures influenced by Robertson's Prince of Wales's plays and productions were W. S. Gilbert, Arthur Wing Pinero, Bernard Shaw and Harley Granville-Barker. Robertson wrote numerous plays for other theatres, and adapted many foreign plays for the English stage, but few of these made a strong or lasting impression. He strove successfully to improve the financial condition of dramatists, securing payment per performance, a basis that became the norm after his death. Robertson suffered from heart disease and died at the age of 42 at the height of his fame and popularity.
Read more or edit on Wikipedia