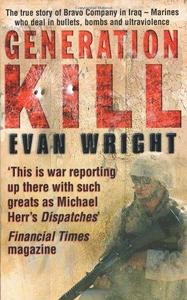 Generation Kill is a 2004 book written by Rolling Stone journalist Evan Wright chronicling his experience as an embedded reporter with the 1st Reconnaissance Battalion of the United States Marine Corps, during the 2003 invasion of Iraq. His account of life with the Marines was originally published as a three-part series in Rolling Stone in the fall of 2003. "The Killer Elite", the first of these articles, went on to win a National Magazine Award for Excellence in Reporting in 2004.
Read more or edit on Wikipedia