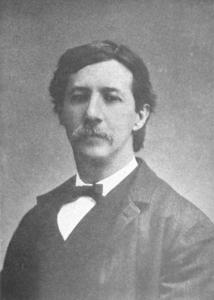 John Augustin Daly (July 20, 1838 – June 7, 1899) was one of the most influential men in American theatre during his lifetime. Drama critic, theatre manager, playwright, and adapter, he became the first recognized stage director in America. He exercised a fierce and tyrannical control over all aspects of his productions. His rules of conduct for actors and actresses imposed heavy fines for late appearances and forgotten lines and earned him the title "the autocrat of the stage." He formed a permanent company in New York and opened Daly's Theatre in New York in 1879 and a second one in London in 1893.
Read more or edit on Wikipedia