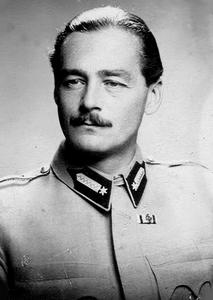 Count Albert Wass de Szentegyed et Czege (Hungarian gróf szentegyedi és czegei Wass Albert, January 8, 1908 – February 17, 1998) was a Hungarian nobleman, forest engineer, novelist, poet and member of the Wass de Czege family. Wass was born in Válaszút, Austria-Hungary (now Răscruci, Cluj County, Romania) in 1908. In 1944 he fled from Hungary, and then joined the fleeing forces of the Third Reich and ended up in Germany, then emigrated to the U.S. After World War II, he was condemned as a war criminal by the Romanian People's Tribunals, however, United States authorities refused to extradite Wass to Romania claiming the lack of solid evidence.The works of Albert Wass first gained recognition within Hungarian literature from Transylvania in the 1940s. In 1944 he moved to Germany and later in 1952 to the United States, and lived there till his 1998 death in Astor Park, Florida. During the communist regime his books were banned both in Hungary and in Romania. Part of his works were published in Hungary after the change of political system in 1989, however, before this time, his works were unknown to the Hungarian public. He is popular among the Hungarian minority in Romania and has a growing popularity in Hungary. In 2005 in a public assessment (Nagy Könyv), he was found to be one of the most popular Hungarian authors: his book "A funtineli boszorkány" (The Witch of Funtinel) was named the 12th most popular book; two more books were named in the top 50 ranking, including the family saga "Kard és kasza" (Sword and Scythe).
Read more or edit on Wikipedia