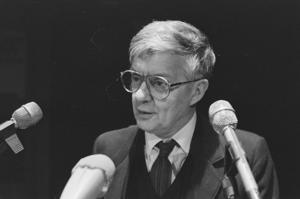 Herman Rudolf "Rudy" Kousbroek (1 November 1929 – 4 April 2010) was a Dutch poet, translator, writer and first of all essayist. He was a prominent figure in Dutch cultural life between 1950 and 2010 and one of the most outspoken atheists in the Netherlands. In 1975 he was awarded the P.C. Hooft Prize for his essays. His principal work is the book Het Oostindisch kampsyndroom (The East Indian Camp Syndrome), a compilation of critical essays that are in one way or the other related to the Dutch East Indies and clearly show his admiration for Dutch Indo-Eurasian authors like E. du Perron, Tjalie Robinson, Beb Vuyk as well as Indonesian intellectual Sutan Sjahrir.
Read more or edit on Wikipedia