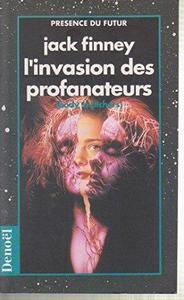 The Body Snatchers is a 1955 science fiction novel by American writer Jack Finney, originally serialized in Colliers Magazine in 1954, which describes real-life Mill Valley, California being invaded by seeds that have drifted to Earth from space. The seeds, grown from plantlike pods, replace sleeping people with perfect physical duplicates with all the same knowledge, memories, scars, etc. but are incapable of human emotion or feeling. The human victims disappear forever. The duplicates live only five years and cannot sexually reproduce; consequently, if unstopped, they will quickly turn Earth into a dead planet and move on to the next world. One of the duplicate invaders claims this is what humans do – use up resources, wipe out indigenous populations, and destroy ecosystems in the name of survival. The novel has been adapted for the screen four times; the first film, Invasion of the Body Snatchers in 1956, the second in 1978, the third in 1993, and the fourth in 2007. It was also the basis of the 1998 movie The Faculty. Unlike the first three film adaptations, which elected for darker, far more dystopian narratives, the novel contains an optimistic ending, with the aliens voluntarily vacating after deciding that they cannot tolerate the type of resistance they see in the main characters and leaving behind a small population of duplicates who are all hunted and killed shortly after.
Read more or edit on Wikipedia