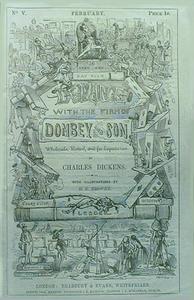 Dombey and Son is a novel by English author Charles Dickens. It follows the fortunes of a shipping firm owner, who is frustrated at the lack of a son to follow him in his footsteps; he initially rejects his daughter’s love before eventually becoming reconciled with her before his death. The story features many Dickensian themes, such as arranged marriages, child cruelty, betrayal, deceit, and relations between people from different classes. The novel was first published in monthly parts between 1846 and 1848, with illustrations by Hablot Knight Browne ('Phiz').
Read more or edit on Wikipedia

original title: Dealings with the Firm of Dombey and Son: Wholesale, Retail and for Export
language: English
date of publication: 1848
genre: social commentary, novel
follows: Pictures from Italy
followed by: The Haunted Man and the Ghost's Bargain