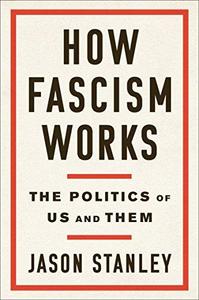 How Fascism Works: The Politics of Us and Them is a 2018 nonfiction book by Jason Stanley, the Jacob Urowsky Professor of Philosophy at Yale University. Stanley, whose parents were refugees of Nazi Germany, describes strategies employed by fascist regimes, which includes normalizing the "intolerable". His book is part of a "wave of articles, books and op-eds" that warn of the "return of fascism", features of which are already evident, according to Stanley, in the politics of the United States, the Philippines, Brazil, Russia, and Hungary.In September 2020, National Public Radio took another look at fascism, and interviewed Professor Stanley, who explained that the book has been reissued with a new preface because global events have substantiated his concern that fascist rhetoric is showing up in politics and policies around the world.
Read more or edit on Wikipedia