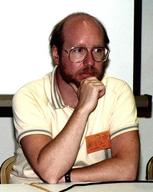 Steve Englehart (; born April 22, 1947) is an American writer of comic books and novels. He is best known for his work at Marvel Comics and DC Comics in the 1970s and 1980s. His pseudonyms have included John Harkness and Cliff Garnett. Source: Wikipedia (en)