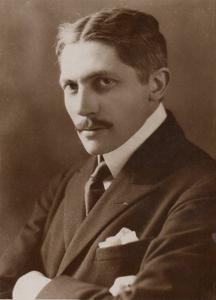 Jacques Pierre Bainville ([ʒak bɛ̃.vil]; 9 February 1879 – 9 February 1936) was a French historian and journalist. A geopolitical theorist, concerned by Franco-German relations, he was a leading figure in the monarchist Action Française. As fascinated as he was worried by Germany which continuously grew stronger, he intensely advocated against democracy, the French Revolution, internationalism and liberalism. A plaza is named after him at the heart of the 7th arrondissement of Paris.
Read more or edit on Wikipedia