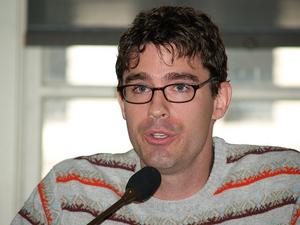 Joshua Ferris (born 1974) is an American author best known for his debut 2007 novel Then We Came to the End. The book is a comedy about the American workplace, told in the first-person plural. It takes place in a fictitious Chicago ad agency that is experiencing a downturn at the end of the '90s Internet boom.
Read more or edit on Wikipedia