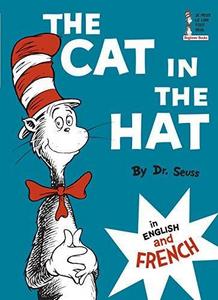 The Cat in the Hat

The Cat in the Hat is a 1957 children's book written and illustrated by the American author Theodor Geisel, using the pen name Dr. Seuss. The story centers on a tall anthropomorphic cat who wears a red and white-striped hat and a red bow tie. The Cat shows up at the house of Sally and her brother one rainy day when their mother is away. Despite the repeated objections of the children's fish, the Cat shows the children a few of his tricks in an attempt to entertain them. In the process, he and his companions, Thing One and Thing Two, wreck the house. The children and the fish become more and more alarmed until the Cat produces a machine that he uses to clean everything up and disappears just before the children's mother comes home. Geisel created the book in response to a debate in the United States about literacy in early childhood and the ineffectiveness of traditional primers such as those featuring Dick and Jane. Geisel was asked to write a more entertaining primer by William Spaulding, whom he had met during World War II and who was then director of the education division at Houghton Mifflin. However, because Geisel was already under contract with Random House, the two publishers agreed to a deal: Houghton Mifflin published the education edition, which was sold to schools, and Random House published the trade edition, which was sold in bookstores. Geisel gave varying accounts of how he created The Cat in the Hat, but in the version he told most often, he was so frustrated with the word list from which he could choose words to write his story that he decided to scan the list and create a story based on the first two rhyming words he found. The words he found were cat and hat. The book was met with immediate critical and commercial success. Reviewers praised it as an exciting alternative to traditional primers. Three years after its debut, the book had already sold over a million copies, and in 2001, Publishers Weekly listed the book at number nine on its list of best-selling children's books of all time. The book's success led to the creation of Beginner Books, a publishing house centered on producing similar books for young children learning to read. In 1983, Geisel said, "It is the book I'm proudest of because it had something to do with the death of the Dick and Jane primers." The book was adapted into a 1971 animated television special and a 2003 live-action film.
Read more or edit on Wikipedia