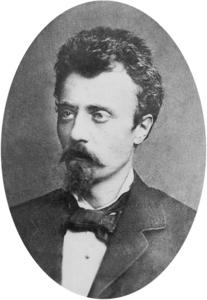 Lazar "Laza" Lazarević (Serbian Cyrillic: Лазаp Лаза Лазаревић, 13 May 1851 – 10 January 1891) was a Serbian physician writer, psychiatrist, and neurologist. The primary interest of Lazarević throughout his short life was the science of medicine. In that field, he was one of the greatest figures of his time, preeminently distinguished and useful as a doctor, teacher, and writer on both medical issues as well as literary themes. To him, literature was an avocation; yet he was talented at it and thought of himself as a man of letters. He translated the works of Nikolay Chernyshevsky and Ivan Turgenev into Serbian. Few writers have achieved fame with such a small opus as Lazarević, for it rests on nine stories; yet he is considered one of the best Serbian writers of the nineteenth century. He was often referred to as the Serbian Turgenev. During his brief life, "the less than prolific opus" enshrined him in Serbian literature as a writer who introduced the psychological story genre.
Read more or edit on Wikipedia