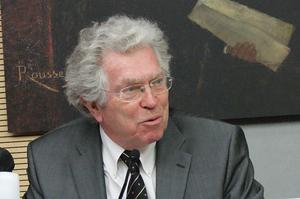 Pierre Joxe (born 28 November 1934) is a former French Socialist politician and has been a member of the Constitutional Council of France between 2001 and 2010. A graduate of the École nationale d'administration, he joined the Court of Audit of France in the 1960s. Whereas his father, Louis Joxe, was Justice Minister of Charles de Gaulle, Pierre Joxe entered politics as a follower of François Mitterrand, first in the Convention of Republican Institutions, then (from 1971) in the renewed Socialist Party (PS). Considered as one of the closest allies of the PS leader, he was elected as a deputy for the Saône-et-Loire département in 1973. He presided over the regional council of Burgundy from 1979 to 1982. In 1981, when Mitterrand was elected President of France, Joxe became Minister of Industry for only one month, before he became leader of the Socialist group in the French National Assembly. Then, he joined the cabinet as Interior Minister from 1984 to the Socialist defeat in the 1986 legislative election. Re-appointed leader of the PS parliamentary group again, he became the Interior Minister after Mitterrand had won a second presidential term in 1988. He was the author of a new law code for Corsica. In 1991, during the Gulf War, he served as Defense Minister. During March 1993, Joxe gave up politics to lead the Court of Audit of France. Then, he was nominated to the Constitutional Council (2001–2010). He has two sons, Benoît Joxe and Baptiste Joxe, both from his third marriage.
Read more or edit on Wikipedia