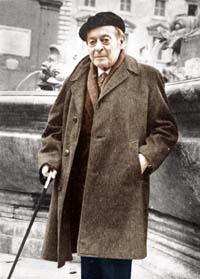 Mario Praz (Italian: [ˈmaːrjo prats]; September 6, 1896, Rome – March 23, 1982, Rome) was an Italian-born critic of art and literature, and a scholar of English literature. His best-known book, The Romantic Agony (1933), was a comprehensive survey of the decadent, erotic and morbid themes that characterised European authors of the late 18th and 19th centuries (see Femme fatale for a reference of one of his chapters). The book was written and published first in Italian as La carne, la morte e il diavolo nella letteratura romantica in 1930; and the most recent edition was published in Florence by Sansoni in 1996.
Read more or edit on Wikipedia