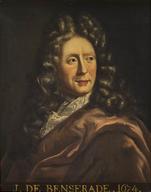 Isaac de Benserade (French: [bɛ̃.sʁad]; baptized 5 November 1613 – 10 October 1691) was a French poet. Born in Lyons-la-Forêt, Normandy, his family appears to have been connected with Richelieu, who bestowed on him a pension of 600 livres. He began his literary career with the tragedy of Cléopâtre (1635), which was followed by four other pieces. On Richelieu's death, Benserade lost his pension but became more and more a favourite at court, especially with Anne of Austria.Benserade provided the words for the court ballets and was in 1674 admitted to the French Academy, where he wielded considerable influence. In 1675, he provided the quatrains to accompany the 39 hydraulic sculpture groups depicting Aesop's fables in the labyrinth of Versailles. In 1676, the failure of his Métamorphoses d'Ovide in the form of rondeaux gave a blow to his reputation but by no means destroyed his vogue with his contemporaries. Benserade may be best known for his sonnet on Job (1651). The sonnet, which he sent to a young lady with his paraphrase on Job, was placed in competition with the Urania of Voiture and led to a dispute on their relative merits that long divided the whole court and the wits into two parties, styled respectively the Jobelins and the Uranists. The partisans of Benserade were headed by the prince de Conti and Mlle de Scudéry, and Mme de Montausier and Jean-Louis Guez de Balzac took the side of Voiture.Some years before his death, Benserade retired to Gentilly and devoted himself to a translation of the Psalms, which he nearly completed. Source: Wikipedia (en)