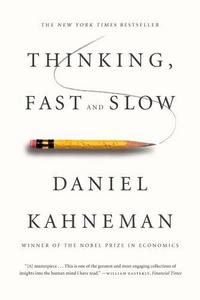 Thinking, Fast and Slow is a best-selling book published in 2011 by Nobel Memorial Prize in Economic Sciences laureate Daniel Kahneman. It was the 2012 winner of the National Academies Communication Award for best creative work that helps the public understanding of topics in behavioral science, engineering and medicine.The book summarizes research that Kahneman conducted over decades, often in collaboration with Amos Tversky. It covers all three phases of his career: his early days working on cognitive biases, his work on prospect theory, and his later work on happiness.The central thesis is a dichotomy between two modes of thought: "System 1" is fast, instinctive and emotional; "System 2" is slower, more deliberative, and more logical. The book delineates cognitive biases associated with each type of thinking, starting with Kahneman's own research on loss aversion. From framing choices to people's tendency to replace a difficult question with one which is easy to answer, the book highlights several decades of academic research to suggest that people place too much confidence in human judgement.The book also shares many insights from Kahneman's work with the Israel Defense Forces and with the various departments and collaborators that have contributed to his growth as a thinker and researcher.
Read more or edit on Wikipedia

Bright Kids Who Can't Keep Up: Help Your Child Overcome Slow Processing Speed and Succeed in a Fast-Paced World

The Things You Can See Only When You Slow Down: How to Be Calm and Mindful in a Fast-Paced World