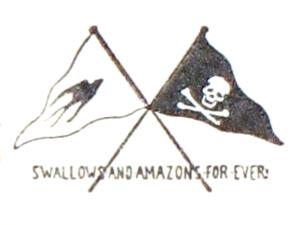 The Swallows and Amazons series is a series of twelve children's adventure novels by English author Arthur Ransome. Set in the interwar period, the novels involve group adventures by children, mainly in the school holidays and mainly in England. They revolve around outdoor activities, especially sailing. Literary critic Peter Hunt believes it "changed British literature, affected a whole generation's view of holidays, helped to create the national image of the English Lake District and added Arthur Ransome's name to the select list of classic British children's authors." The series remains popular and inspires visits to the Lake District and Norfolk Broads, where many of the books are set. There are several societies for studying and promoting Ransome's work, notably this series. The earliest was the Arthur Ransome Club in Japan. The British-based Arthur Ransome Society has an international membership.
Read more or edit on Wikipedia