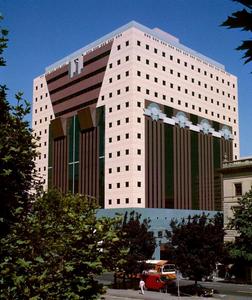 broad movement that developed in the mid- to late 20th century across philosophy, the arts, architecture, and criticism

Postmodernism is a broad movement that developed in the mid-to-late 20th century across philosophy, the arts, architecture, and criticism, marking a departure from modernism. The term has been more generally applied to describe a historical era said to follow after modernity and the tendencies of this era. Postmodern thinkers frequently describe knowledge claims and value systems as contingent or socially-conditioned, framing them as products of political, historical, or cultural discourses and hierarchies. These thinkers often view personal and spiritual needs as being best fulfilled by improving social conditions and adopting more fluid discourses, in contrast to modernism, which places a higher degree of emphasis on maximizing progress and which generally regards the promotion of objective truths as an ideal form of discourse. Some philosophers assert that those who employ postmodernist discourse are prey to a performative contradiction and a paradox of self-reference, as their critique would be impossible without the concepts and methods that modern reason provides.Postmodernism is generally defined by an attitude of skepticism, irony, or rejection toward what it describes as the grand narratives and ideologies associated with modernism, often criticizing Enlightenment rationality and focusing on the role of ideology in maintaining political or economic power. Common targets of postmodern criticism include universalist ideas of objective reality, morality, truth, human nature, reason, science, language, and social progress. Accordingly, postmodern thought is broadly characterized by tendencies to self-consciousness, self-referentiality, epistemological and moral relativism, pluralism, and irreverence. Postmodern critical approaches gained popularity in the 1980s and 1990s, and have been adopted in a variety of academic and theoretical disciplines, including cultural studies, philosophy of science, economics, linguistics, architecture, feminist theory, and literary criticism, as well as art movements in fields such as literature, contemporary art, and music. Postmodernism is often associated with schools of thought such as deconstruction, post-structuralism, and institutional critique, as well as philosophers such as Jacques Derrida, Jean-François Lyotard, and Fredric Jameson. Criticisms of postmodernism are intellectually diverse and include arguments that postmodernism promotes obscurantism, is meaningless, and that it adds nothing to analytical or empirical knowledge.
Read more or edit on Wikipedia