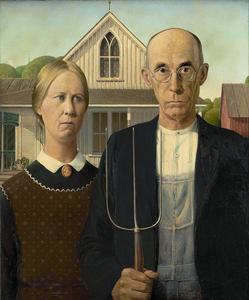 international art movement flourishing in the interwar period; reacts to the hardships suffered by people after the Great Crash; involves realist portrayals of anonymous workers or celebrities as heroic symbols of strength in the face of adversity

Social realism is the term used for work produced by painters, printmakers, photographers, writers and filmmakers that aims to draw attention to the real socio-political conditions of the working class as a means to critique the power structures behind these conditions. While the movement's characteristics vary from nation to nation, it almost always utilizes a form of descriptive or critical realism. Taking its roots from European Realism, Social Realism aims to reveal tensions between an oppressive, hegemonic force and its victims.The term is sometimes more narrowly used for an art movement that flourished between the two World Wars as a reaction to the hardships and problems suffered by common people after the Great Crash. In order to make their art more accessible to a wider audience, artists turned to realist portrayals of anonymous workers as well as celebrities as heroic symbols of strength in the face of adversity. The goal of the artists in doing so was political as they wished to expose the deteriorating conditions of the poor and working classes and hold the existing governmental and social systems accountable.Social realism should not be confused with socialist realism, the official Soviet art form that was institutionalized by Joseph Stalin in 1934 and was later adopted by allied Communist parties worldwide. It is also different from realism as it not only presents conditions of the poor, but does so by conveying the tensions between two opposing forces, such as between farmers and their feudal lord. However, sometimes the terms social realism and socialist realism are used interchangeably.
Read more or edit on Wikipedia