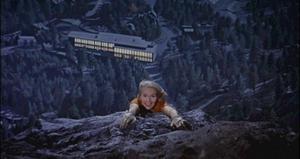 Thriller is a genre of fiction with numerous, often overlapping, subgenres, including crime, horror and detective fiction. Thrillers are characterized and defined by the moods they elicit, giving their audiences heightened feelings of suspense, excitement, surprise, anticipation and anxiety. This genre is well-suited to film and television. A thriller generally keeps its audience on the "edge of their seats" as the plot builds towards a climax. The cover-up of important information is a common element. Literary devices such as red herrings, plot twists, unreliable narrators, and cliffhangers are used extensively. A thriller is often a villain-driven plot, whereby they present obstacles that the protagonist or hero must overcome. Some examples of thrillers are the films of Alfred Hitchcock around the mid 20th century. Some popular modern mainstream examples include the books and films in the Millennium series by Stieg Larsson and The Girl on the Train book and film.
Read more or edit on Wikipedia